QPR1stPosted on February 18, 2020 Posted in Boardroom, Community
We received the following information from James Grimes from The Big Step which we think is worthy of support, we look forward to James and fellow walkers visiting QPR at the Kiyan Prince Foundation Stadium on the evening of the 25th February.
The Big Step (www.the-bigstep.com),  are a Gambling with Lives (www.gamblingwithlives.org) charity fundraising project which tries to get football to evaluate it’s relationship with gambling. Gambling with Lives was set up by bereaved families of young men who took their own life as a direct result of their gambling addiction.
From February 23rd until February 26th we are walking 100 miles in 75 hours, visiting six Premier League and Championship clubs that have a gambling shirt sponsor. The ultimate aim is to prevent any more gambling related suicides, but initially it’s getting football clubs to reconsider this sponsorship and equally raise awareness of gambling addiction, the suicide risk and where to go for treatment. 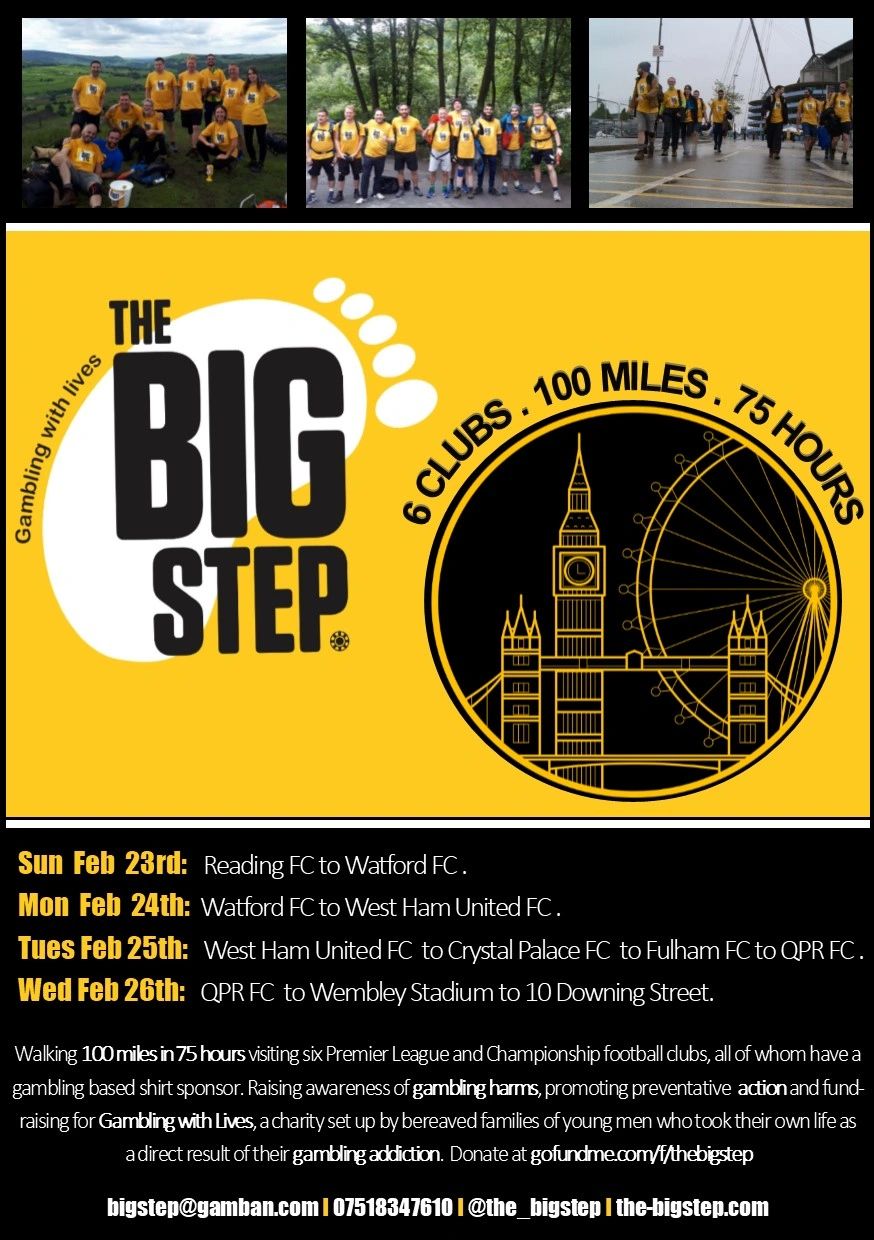 The donation page is https://gofundme.com/f/thebigstep.  Any form of support, participation or donation would be much appreciated.

END_OF_DOCUMENT_TOKEN_TO_BE_REPLACED

Tony Fernandes steps aside from Air Asia amid bribery probe

QPR1stPosted on February 5, 2020 Posted in All News, Boardroom

It is with regret that QPR1st has learnt of allegations of bribery made against Tony Fernandes which it should be noted he has categorically denied. The allegations appear to relate only to Mr Fernandes’s other sporting interest the Caterham F1 team and although Mr Fernandes has stepped down as chief executive of Air Asia temporarily, his involvement with QPR remains to the best of our knowledge unchanged. We will however continue to monitor the situation and if we deem it necessary will contact the Club for further information.

For additional information please see the BBC article below
https://www.bbc.co.uk/news/business-51353498

QPR1stPosted on September 29, 2019 Posted in Community

Reading supporters donate £500 and urge fans to follow their lead

Following the EFL’s recent decision to refuse to allow Bury FC to re-enter League 2 next season, Forever Bury has urged football fans across the UK to contribute to their crowdfunding campaign to raise £1 million to rebuild Bury FC.

So far, almost £12,500 has been raised, including a recent £500 contribution from Reading supporters – Supporters Trust at Reading (STAR) who say:

“It’s terrible what’s happened at Bury. We hope supporters all around the country can rally to your cause and you’ll soon be back on the pitch.”
Go to the crowdfunding website to donate

QPR1stPosted on September 10, 2019 Posted in All News, Community

Every year on 10 September mental health organisations around the world support World Suicide Prevention Day. The purpose of this day is to raise awareness around the globe that suicide can be prevented. We are pleased that QPR is supporting this initiative today by promoting The Samaritans and its Real People Real Stories thread. https://www.qpr.co.uk/news/club-news/dont-keep-it-in/

If you, or someone you know is feeling suicidal The Samaritans helpline is available seven days a week, 24 hours a day call 116 123 for free or visit samaritans.org

QPR1st were saddened to hear today the Mike Ferguson has passed away at the age of 76.

Mike played for the R’s between 1969 and 1973 including a period as captain and was inducted into the Forever R’s club last season. He is fondly remembered by supporters who saw him in the Hoops. Our thoughts are with his family and friends.

QPR1stPosted on August 29, 2019 Posted in All News, QPR1st, Supporters Direct

QPR1st wishes to offer sympathy to the fans and employees of Bury Football Club. As a Supporters Trust we are part of a national movement that believes that Football clubs should be recognised and protected as vital community assets.

Unfortunately as we know from QPR’s own history, clubs are too often treated as commodities to be exploited by speculators who prove themselves to be incompetent, unscrupulous or both. It is difficult to think of any British industry that impacts on the lives of so many and yet is so badly regulated and governed.

The expulsion of Bury and the ongoing decline of grassroots football in this country whilst obscene sums of money are being splashed about and pocketed in the premier league provides a undeniable case for radical reform.  If the football league does not have the will or authority to achieve this then the only solution is Government intervention.

QPR1stPosted on June 8, 2019 Posted in Community

We would like to congratulate Chris Ramsey who was awarded and MBE in the Queens honours list.

There is a video interview with Chris on the Club website

We are saddened and shocked to hear of the passing of Justin Edinburgh, aged 49.

Our condolences and thoughts go out to his family and friends as well as everyone that worked alongside Justin at Orient.

One Orient supporter said: “It is hard to explain how much this man lifted our club when it was on its last legs . He made supporting the Os seem like fun again and we all fell back in love with the club.”

Edinburgh led Orient’s promotion back to the Football League in May, less than two years since he became manager at Brisbane Road.

QPR1stPosted on June 5, 2019 Posted in All News, Community, Supporters Direct

The Football Supporters Federation is asking London football supporters for their views on policing and stewarding. Views gathered will inform the work of a newly established Independent Advisory Group working with the police on football issues in London. The Group includes representatives of supporters’ trusts, including QPR1st. Please fill in the survey, and also let us know if there are issues you would like to be raised with the police or the club on policing and stewarding. The survey link is below:

Less than a year ago, in May 2018, we thanked Ian Holloway for all his hard work as he was replaced as QPR manager. We said “Supporters have a range of views of his recent time as manager ; but he was tasked with the job of keeping the club in the Championship with a team in transition, and he achieved this. He had to keep the show on the road in an environment where the wage bill had to be cut and experienced players would leave the club.”

Although Steve McClaren does not have the same great history with QPR As Ian Holloway, we could make a similar statement today. We also thank Steve McClaren for doing his best in difficult circumstances.

We hope his successor will be chosen after a clear process, and given clear objectives. The board needs to stop selecting names from England’s footballing past who have no track record in managing in a difficult financial environment such as QPR today faces. We want a manager capable of creating a committed, well-organised team, making the best of the resources we have. We want that manager to be given the time to develop an entertaining, committed QPR style, good enough to keep us in this league and to build on for the future.